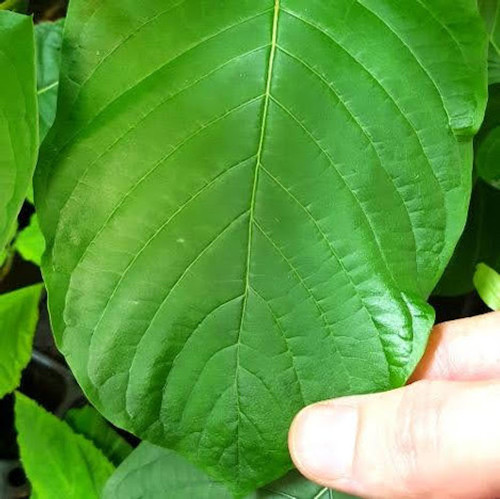 SKU:
bbgp
UPC:
Availability:
Usually ships on the upcoming monday or tuesday after payment is received.
Shipping:
Calculated at Checkout
SHIPPING NOTICE!:
Please be aware that live plant orders will not ship out during extreme weather conditions. Please see our plant shipping schedule located in the "shipping and returns" page for more details.

The Bumblebee clone is beleived to origionally be grown in the united states from seed that was brought back from Vietnam. Bumblebee kratrom displays a very predominantly green vein and wide rounded leaves that terminate into a point that actually resemble...well.. a bumblebee! The bumblebee clone is not only unusual for other kratom plants in appearence, but aslo chemotype as it possesses very little to no mitragynine. Instead it has increased amounts of other   kratom alkaloids yet to be determined.

Bumblebee is the most widly available kratom clone out there on the market today! Many(and I mean many) kratom plant vendors even market Bumblebee as other varieties! So watch out! Heres a few examples of how some vendors might trick you into thinking your getting another veriety.

1. Theyll use pictures of the newest developing leaves at the growing tips of the plant only. This is because new leaves can display some red on the veins and give you the perception that its a differant clone!

2. Theyll use a picture of a horned leaf. Bumblebee clones can produce horned leaves in certain growing conditions like hot weather, but the horns tend to be a bit stubby compaired to other kratom phenotypes that also grow horned leaves. So if it looks like a wide Bumblebee leaf with stubby horns thats probably what it is!

Plants arrive in either a grow plug without soil which is ready for either soil or hydroponic mediums, or in a 2.5 inch pot...depending on your choice.

If you have any questions feel free to ask!!